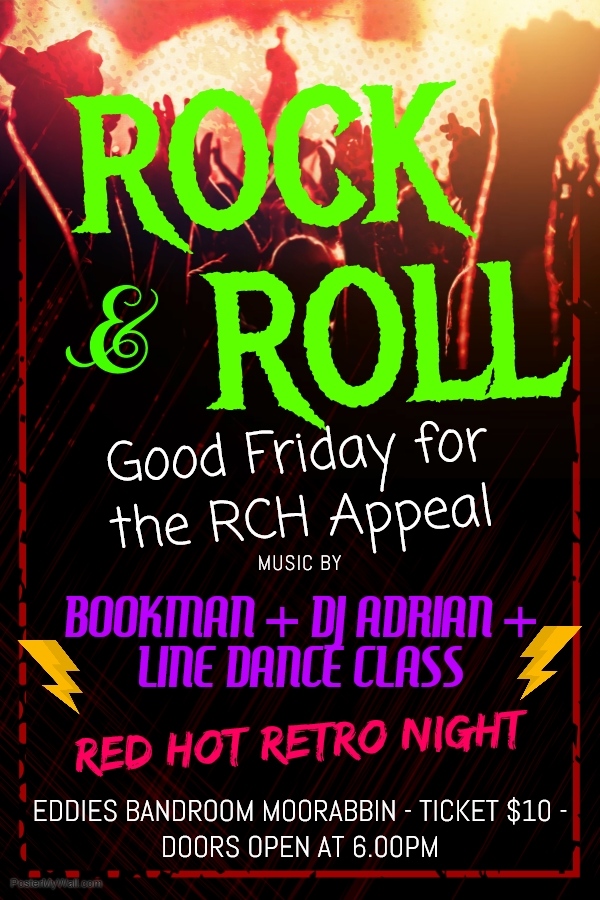 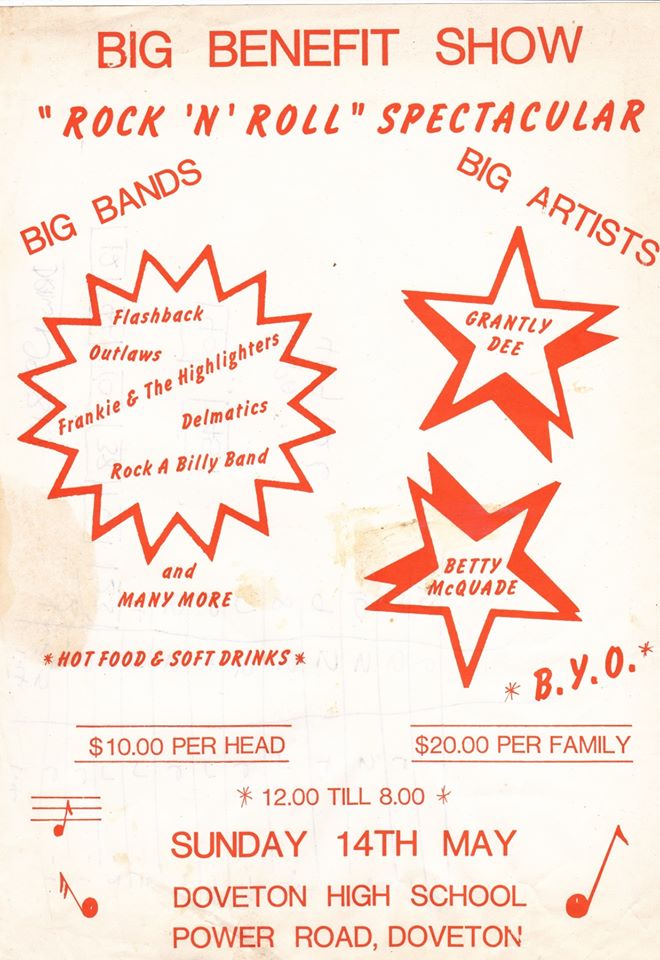 Fudriaser dance to raise money for the band Flashback who had their equipment stolen.  The dance was either in 1984 or 1985.  The Doveton dance was held regularly over those years.  Flyer waas kept by Frankie Stevens who also performed on the night.

There are many things one can feel proud as a rock & roller in Melbourne, and the charity dance held on Good Friday every year is certainly one of those proud moments. The charity dance is a small but nonetheless a very practical avenue for rockers to show their financial & moral support for those in need and who are in less fortunate circumstances. This year there are at least a couple of major events being staged - Rockn' Suzie in Berwick and the hot rods show & bands at Keilor Hotel. From all reports both events were well attended by rockers and the general public.

I have been attending the dance in Berwick for a number of years now. This year, at the latest count, over $13k has been raised and there are still coins to be tallied up. Well done to all and specially the Rockn' Suzie crew who put in a big effort in organising and staging the event. There were about 8 bands for the event including the popular Robin & the Rancheros, Fender Benders, Honky Tonk Rockers, Smokin' Wingtips and the Phoenix. It was non stop dancing from morning to night. There were merchandise & food vendors, hot rods and classic cars on display and for the little kids, face painting and pony rides too.

A special highlight on the day for the little ones and also those not so little ones was Easter Bunny making an appearance dancing with the kids and later distributing Easter eggs. Lots of photos were taken of the very excited little kids in seeing the Easter Bunny.

Rock n roll dancers have always supported a good cause and over the years lots of money has been raised by bands donating their time to put on dances where all funds raised have gone to a good cause. 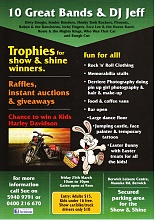 2020 virtual Good Friday Fundraiser live streamed on Facebook due to the Corona Virus lockdown, raised $1500.  Organised by DJ Antony with

Benifet For Madison Bartlett, Immortals Motor Bike Club & the Hurstbridge Police Station have united forces toward raising money for a very special girl Madison Bartlett, Countless stories of sorrow and survival have come from the Black Saturday fires, but few could be more poignant than that of 12 year old Madison Bartlett in Royal Children’s hospital with burns to 50 percent of her body and will remain in there for some time to come. 7 bands at Immortals Clubrooms, Bayswater

Northside Rock EASTER SATURDAY Fundraiser featuring “Battle Of the D.J’s”, with DJ Flash Gordon & DJ Jeff Poole. This will be a fundraiser for cancer research, from 7:30pm until 12:30am at the Heritage Receptions High Street Epping. NO BYO DRINKS or FOOD Tickets are $15 and children $7. Enquiries with Clive on 0424 403 762. 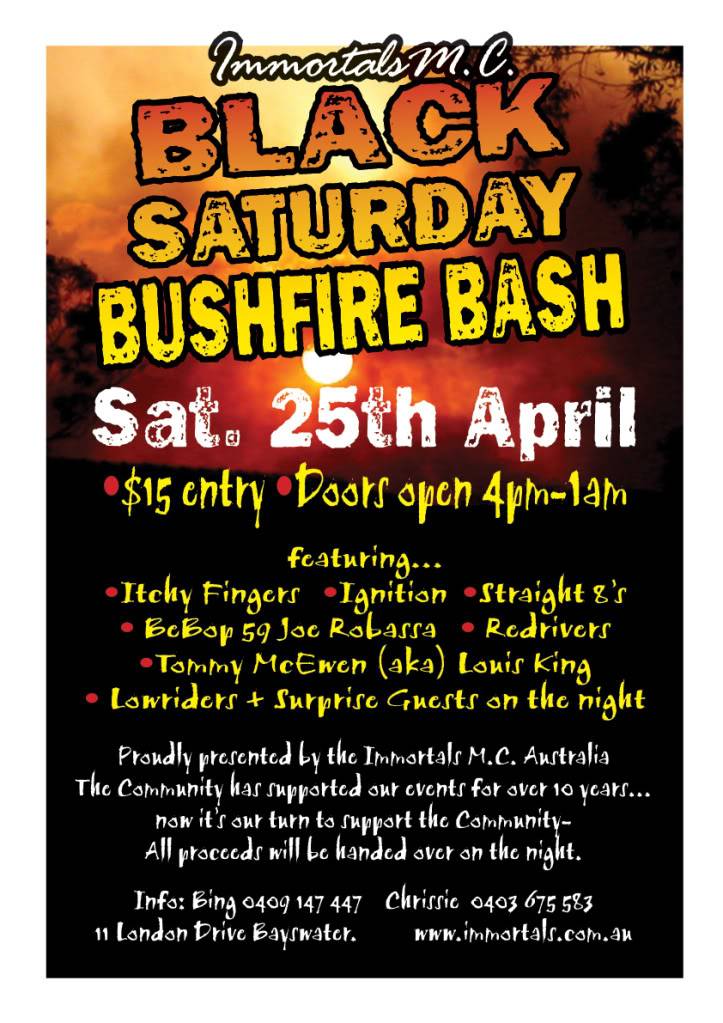 Hope Ellis-Buxton Fundraiser, 6th of March in the Hallam Rec Hall in Frawley's Rd . 3 Bands Blackhill Ramblers, Atomic Hi-Tones and the Flyin Saucers. Hope is the granddaughter of Rhonda Ellis who is part of the furniture in the collective Melbourne, Rock'n'Roll/Rockabilly/Hot Rod scene, Adorable Hope who just turned 3, was born with a few problems that require lots of special equipment to support her while sleeps and to help her get around.

Fundraiser at Skyways run by Rhonda & Ray from Renegade Rockers raised $3,000 for Brett Sommers who was battling cancer.

Tearin' it up for Tassie fundraiser Sunday 24th March 2013 at Lucky 13 Garage, Moorabbin. Fundraiser for The Fire Victims of Tasmania, organised by Emily Mason with 5 bands donating their time :The Sin & Tonics (Tas), Paulie Bignall & The Thornbury Two,The Rechords, The Detonators, Matt Dwyer & The Magnatones. 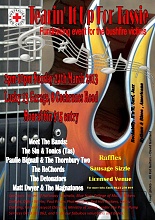 FFF 2013 Fundraiser dance at Bayswater Senior Citizens hall. $2200 raised for Dunalley School which was burnt to the ground durring the Tassie Fires. A very small community was devastated. The FFF Group (Fundraising Friends Forever) was formed from people wanting to help others less fortunate.

Bushfire relief appeal fundraiser dances organised by Adrian Spadaro and Red Hot Rockers, were held on Fri 17th Jan at Eddies Bandroom and on Mon 27th Jan at Maribyrnong Bowls Club.  A total of $15,135 was raised from the dances and raffles.  The money was donated to the CFA at the Syrena Polish club dance on the 13th March 2020.  A fabulous effort by all involved.  Thank you to all the bands who donated their time, those who donated raffle prizes and all who helped out at the dances.

A bush fire benefit gig featuring the Honky Tonk Rockers and Jump Cats was held at Eddies Poolroom last Friday night drawing in a big crowd of rock n roll and swing dancers who were very enthusiastic to do their little bit in support of those communities devastated by the recent, and ongoing, bush fires around Australia. It was a fantastic night of dancing to country rock music by the Honky Tonk Rockers and jump blues from the Jump Cats. Announcement of total collection on the night was eagerly waited and it came to over $5,000 collected from entry fees, raffles and personal donations. Well done everyone! This is a wonderful effort and congratulations go to all who came to support the event, Eddies Poolroom, the bands involved and Adrian who organised and coordinated it.

This is tangible proof that rockers not only love their music and dancing but they also care for the community at large and especially those hit by tragedies and natural disasters like floods and bush fires. Our rock n roll community should feel proud having held such events in the past, and I am certain we will continue the tradition of showing goodwill in future years to come.

Another bush fire benefit event at Eddies is scheduled for Friday, 7th February with three bands playing - the Pearly Shells, the Treblettes and Lost In Louisville. Please come along to support this second bush fire benefit event. Come and dance to the bands and have a great time. But most of all, come with a big heart in support of those who have suffered great losses in the bush fires.

Another fundraiser to be held on Mon 27th Jan (australia Day holiday). Live bands and dancing from 1pm to 10 pm will be held at the Maribyrnong Bowls Club located at 195, Holmes Road, Moonee Ponds. There will be 5 bands contributing freely of their time and music to the bush fire appeal dance and they are the Fender Benders, Joe Galea Band, Josie & the Corvettes, Kid James Trio and the Uptown Cats.