There have been many fabulous rock n roll bands playing 50's and 60's dance music around Melbourne.  This page will attempt to list them all eventually.  Contributions please!

Note videos do not display in Internet Explorer

The Band started slowly with few gigs on offer so decided to start their own dance Rockhouse, holding monthly dances at 1/899 Mountain Hwy, Bayswater.  The Rockhouse ran for 4 years and they also ran monthly dance competitions. Sue Wilkinson was appointed Dance Comp promoter & organizer & unlike all in Comps at other Dances we had individual couples compete solo in turn with 5 judges ( Technique - Choreography - Dress - Originality - Showmanship )  scoring out of 100 ( 20 points max per judge ) with monthly winners competing in an end of year dance off with winners receiving Championship Silk Jackets  The dance was held on the 3rd Saturday of each month and went from 60 attendees at the 1st dance to Crowds of 300 & more from the 3rd month of operation. By that time the Band had become quite popular & were soon regularly working 4 gigs per week  at all major venues. The dance lasted around 4 years when  the Bayswater Darts Club decided to sell the venue thus ending operations. No other venue could be found with the same unique atmosphere so the Dance expired but the memories live on.  Dance posters were done by band manager and bass player Len O'Connor.  The posters were all designed in black & white, printed, then hand painted with poster colour by hand by Len - a long & arduous job with 7 or 8 required for each monthly dance.  The dancers were proud to see their names prominent & all added to the importance we placed on the dancers involved - It made Rockhouse unique. 2 of the Rockhouse posters are in the photo gallery.

The Atomic Hi-Tones are a Melbourne based Rock and Roll/Rockabilly band that quickly became one of the most in demand Rock and Roll/Rockabilly bands in Australia since its inception around 2001. The band currently comprises Cliff Jolly (Cliffy) on lead vocals, Harry Longworth on lead guitar, Ben Pratt on slap bass and Rob O”Toole on drums. The bands repertoire is very diverse including material from numerous genres including Rock and Roll, Country, Blues, Rockabilly and Mainstream, however due to the bands dynamic on stage style their music is frequently described as smooth or/and adrenalin charged Rock and Roll. The band has supported many touring overseas acts including Lee Rocker from the Stray Cats (USA), Reverend Horton Heat (USA), Si Cranston (UK), Phil Haley and his Comments (UK) and recently The Kingcats (UK) to name a few. The Rockin Daddys have also supported many home grown Rock and Roll names like Colin Cook, Wilbur Wilde and the Trouble Makers and even Geoff Cox (Coxy) from The Little River Band has sat in on drums which went to air on TV to name a few more. The band has toured constantly playing many times (14 all up) at Wintersun/Cooly Rocks On, three tours to The Beach Hop in New Zealand and most states of Australia including Tasmania and a constant playing of gigs in Sunny Queensland. The band won Best Rockabilly band at Wintersun 2009. Our music is played on many Melbourne radio shows and had a long run on TV with Rodders Life, a very popular Hot Rod Show. The Atomic Hi-Tones play almost every week at a venue around Melbourne and quite often than not up to three gigs a weekend.

James from the Fenderbenders solo gig from 2017 onwards.

Formed in August 1997, and based in Melbourne Australia the hard working quartet known as The Detonators have become Australia’s kings of roots rock n roll. Their original music to which all members contribute is best described as a lethal combination of rockabilly, blues and early rock n roll. The Detonators have toured to all corners of Australia, done all major blues and roots festivals more than once and have ventured into Europe with their high powered original show. The band is constantly gigging and has a huge local and interstate following. With five Cd’s in their arsenal they have recently had their music on the film “Charlie and Boots” as well as the Australian TV series Underbelly. Cold Chisel have labelled The Detonators as their favourite band and have used The Detonators as support at their sold out Rod Laver arena gigs. Dancing shoes and drinking arms are compulsory for any good time Detonators show.

In 2011 the band celebrated their 50th anniversary.

2002 bio.  Formed in 1980?  The band clebrated 30 years in 2010 with a sold out event at the Whitehorse Club.  SInger Danny Boyd was very ill and wheelchair bound but still managed to perform.  Danny passed away not long after.  Danny's son Michael took over and the band continued for another 6 years, disbanding in 2016.

Often referred to as 'The Legendary Flashback', the band was formed well over three decades ago by the DeRizzario brothers. They were later joined by Tony Samson (rhythm guitarist), who ran the band. Later they were joined by Danny Boyd who was seen on the TV show 'New Faces' performing the 'Elvis' song, 'Blue Suede Shoes'. He became the fifth member.

Eventually the three DeRizzario brothers left and formed another now well-known band, Mustang. Over the years there have been many replacements for them. At one time they lost their drummer, Paul Allan, to a heart attack. Their lead guitarist went to France and was replaced by Lyndon Lewis who is now with Shadoogie. Danny says,"Lyndon has to be one of the best guitarists in Australia for Rock and Roll music".

The last 20 years has been a pretty stable period for 'Flashback'. They have played all over the southern states of Australia and have to be the most versatile Rock and Roll band around at this time. They play a diverse range of music including songs by Frank Sinatra, Dean Martin, Al Jolson, Bobby Darren as well as Elvis Presley and all the other original artists from the fifties and sixties period. They have something for all ages and the versatility of their lead singer Danny enables them to satisfy a broad scope of music tastes.

The band is regularly booked to play at the 'Adelaide Festival', the 'Geelong Festival', and the 'Hastiings Festival' and have played at the Melbourne Arts Centre. Over the years they have played at just about every R.S.L. Club, Hotel, Town Hall, Community Centre and Reception Centre in Melbourne and have been seen regularly in country Victoria, Tasmania, New South Wales and South Australia.

They have backed many artists over the years such as Grantly Dee, Merv Benton, Betty McQuade, Dennis Walter, Billy O'Rourke and Ann Maree to name a few. One of the most difficult things for a band is to have the right chemistry between the members so that the band works well on and off the stage. Flashback certainly has the right chemistry.

Most muso's become band members for two reasons, the opportunity to play the music they love and for the extra money it can bring. (Although all will tell you, "if it's only money your after, you wouldn't bother being a band member". The cost of hiring a band hasn't changed much in the last 20 years.)

Flashback band members do it for the music. Money comes a distant second. At all times the cost of hiring the band is based on what the hirer can afford rather than any set fee. They have a reputation for providing the best for less. This Rock and Roll band has to be the busiest in Victoria, playing three to four nights every week, week in week out, always giving one hundred percent.  2002 vicrock.com.au

Video of Flashback on the Ernie Sigley show 1989

Frankie and the Highlighters

Lead singer of Frankie and the Highlighters from 1985 - 1999. After Frankie had major surgery Frankie and Highlighters disbanded.   After recovering Frankie started a solo career, as the guy's from the band had started other options.  Frankie has performed for the President of the Philippines, President Clinton, the Governor of Guam, The Governor of Saipan and was flown to Shanghi to do their equivalent of the academy awards.  Frankie was a regular performer for 8 years at the Frankston RSL, 7 years at Dandenong RSL, and has performed for all the major Football Clubs, Collinwood, Hawthorn, Richmond, Carlton, North Melbourne etc.  Frankie aslo performs regularly for the Red Hatters which is a worldwide Organization and has also had stints on the ABC, Channel 7's Acropolis Now.  Frankie has also played for the King and Queen of Rock n Roll TV show and the Rock the Boat cruises in Melbourne.  In 2019 he has performed at Frankston and Clayton RSL's. 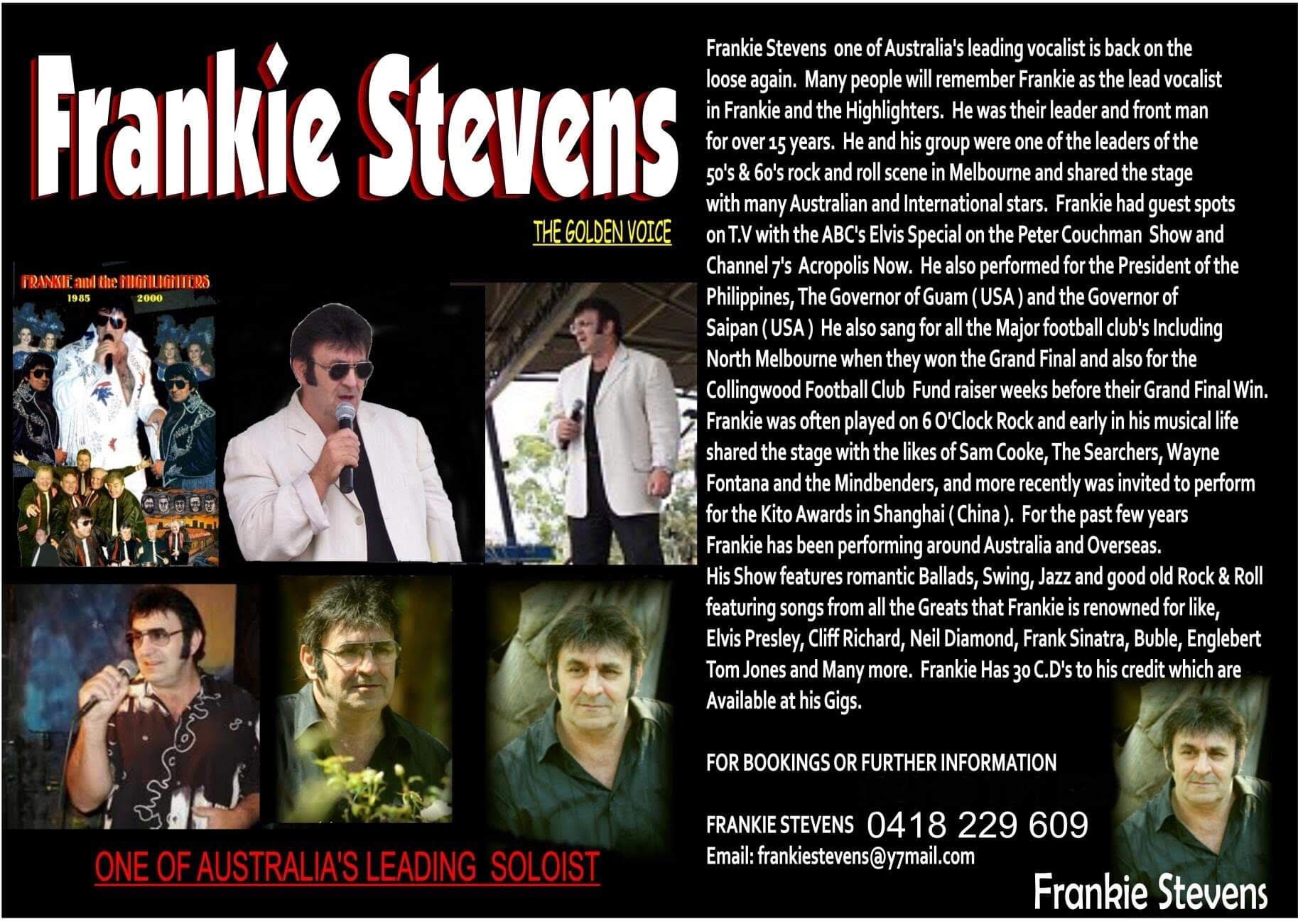 Planets - The Planets band started a dance behind Gilbeys Gin and it was called the Hyway club in Moorabbin. The dance was ran by Doug Bricker whose father was the Mayor of Moorabbin. The Strangers, The BeeGees were often guest artists at the dance.The dance was packed every week and was a great local gig.

Robyn and the Rancheros

Rosie and the Mighty Kings

Rosie and the Top Cats

Disbanded in 2008 when Lyndon Lewis moved to Merrimbula.  Lyndon then ran the Saphire Coast Rock n Roll festival for the next 10 years.  Shadoogie then reformed to do some gigs in 2012 with Danny Boyd from Flashback as lead singer, later playing some gigs in Merrimbula.

Duo Clive ‘Cee Jay’ Jones and Tony ‘Monty’ Montesano, who founded the Rock’N’Roll band The Speedsters nearly 30 years ago have teamed up as a duo - SHAKE-2. They’re bringing their brand of Rock’N’Roll to the music scene across Melbourne and Australia playing at clubs, pubs and dances from 2018 onwards.

Sweet Felica and the Honey Tones

THE VINCENTS were formed in 1981 and from the start became one of Melbourne’s top rock 'n' roll bands playing a touch of commercial to authentic 50's & 60's rock 'n' roll music with a splendour of harmonies.  Also available as a duo.  Bookings 0419377706, website http://thevincents.com.au

ROBERT – (Guitar, Vocals & Keyboards)  Robert has been respected in the music industry for 30 years not only for his musicianship on either guitar or keyboards but also his vocal ability from high falsetto, mellow ballads through to raunchy rock. Robert is the consummate professional, and has performed for bands such as 'Big Push', Redtime' and 'Free & Easy', to name a few.

MARK – (Lead Guitar and Vocals)  Younger brother to Robert, Mark was raised in a family with a distinguished musical heritage going back generations. He took up the guitar at the age of eight and has become a proficient guitarist in the following years.

TONY – (Drums) Tony is an outstanding musician with a wealth of experience, having performed with Victoria's top class acts since the early '60s through to today. Bands 'Carmen Sweet', 'Schoolz Out', 'Rough Cut' and 'Crackerjack'. Tony has a reputation for quality musicianship unsurpassed and is the engineroom to THE VINCENTS.

GERRY - (Saxaphone) A full time music teacher, Gerry has a wealth of experience that leads back a long time and Gerry adds that missing link to The Vincents which makes the band sound that little more 50’s Rock and Roll.

Who Was That Cat